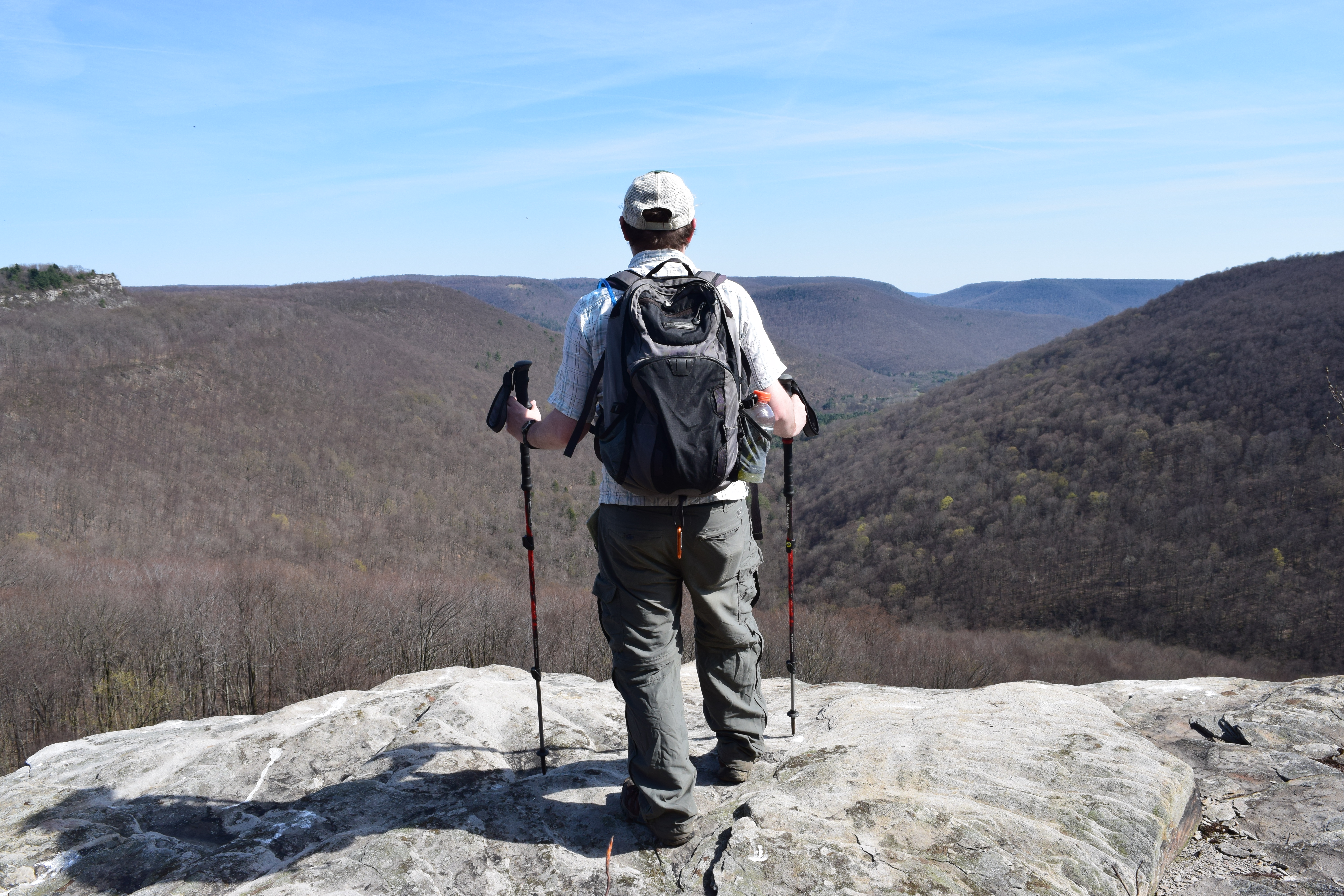 On a warm, sunny Sunday morning I drove past Ricketts Glen as its parking area filled with cars. I kept driving as people were playing softball in Montoursville.  I drove by the Wegman’s in Williamsport, the sun reflecting off of all the cars in trucks.  I was headed somewhere different, a place few have seen.  A hidden realm in a forest of change.

Several years ago, while researching hikes for the second edition of Hiking the Endless Mountains, I saw a place on the map that intrigued me.  Frozen Run cut a deep gorge through the plateau.  The topographic lines were tight, the place seemed rugged.  It looked to have potential, but I knew nothing about it.  There was no information about the gorge and it seemed hardly anyone ever went there.  It was miles from a paved road.  In my small Saturn, I climbed up the ridge, following a narrow dirt road, wondering what I was getting myself into.  It was July.  It was hot.  Humidity veiled the mountains.  I passed an overlook to the west to see miles of unbroken forest and rolling ridges separated by deep hollows and valleys.

The road ended and I found a place to park.  Without a trail, I followed a side stream down to Frozen Run Gorge.  The beauty was impressive.  A pristine stream tumbling over massive boulders into clear pools.  A stunning falls that appeared from between jumbled boulders.  A grotto of red bedrock, moss, waterslides, falls, and pools.  I couldn’t believe a place this uniquely beautiful could be so unknown.  Looking back, this may be where it began for me- Frozen Run taught me that Pennsylvania was a land of hidden wonders, off trail and off road, waiting to be re-discovered.  I changed from the path less traveled, to no path at all.

View of the Pickenville Mountain Cliffs

I returned again, motivated to explore more of the gorge.  Satellite images showed a prominent cliff along the north rim.  After seeing photos of a hike on the impressive cliff on nearby Pickenville Mountain, located on private land, I was excited to see what Frozen Run had to offer.

I met up with Mike and we drove through the state forest.  It had changed remarkably from my last visit with pipelines, widened roads, drill pads, and a compressor station.  The overlook that once featured unbroken forests, now marked with pipelines, pads, and roads.  Maybe something of monetary value was gained from all of this, but something was also lost.  I felt as if I should’ve been more dismayed than I was, maybe I just accepted it now.  Maybe I found solace in that Frozen Run remained unscathed.  We drove on and soon reached a small place to pull off and park.

Our route was different than the one in my book.  We hiked down the tributary and then crossed it, climbing to the edge of the plateau along an old grade.  We were treated to three vistas looking down the gorge, with the dramatic cliffs of Pickenville Mountain in the distance.  At one overlook, a rattlesnake announced its annoyance with a shrill buzz, but it remained invisible among the leaves.  We soon left.  Snakes were a concern on this hike, but I hoped it was still too cool for them.  Seeing one caused some concern, since the cliffs were hiking to faced south in the warm sun.

We dropped from the plateau and reached Frozen Run.  Mike was impressed with all its boulders, rapids, cascades, and pools.  Even I forgot just how lovely it was.  We hiked up to the private property line where there was a small waterfall over boulders.  A quick climb out of the creek and to the plateau followed, as we now headed east along the north rim of the gorge.  We soon reached the cliff rim, protected by jungles of mountain laurel.  The vistas soon appeared on ledges and rock outcrops.  They were beautiful.  The cliff was impressive as the earth fell away; we could hear the roar of Frozen Run below.  Not wanting to surprise any snakes, I called out to them and hit the grounds and rocks with a stick.  We wouldn’t hear another rattler, but Mike did see one hidden bashfully under a rock, right where it belonged.

As we hiked east, the views only improved, becoming more dramatic from the exposed cliffs.  We were impressed.  The mountains had ridges, tiers, and hollows as the high cliffs of Pickenville rose to the northeast.  This place was wild.

And then we reached a prominent ledge, we hiked out to it.  It was breathtaking.  The easternmost and last vista over Frozen Run Gorge.  The gorge just fell away from us as vultures soared far below.  We couldn’t believe it.  Frozen Run continued to roar.  We sat there to take it all in, under the warm sun and bright blue skies. 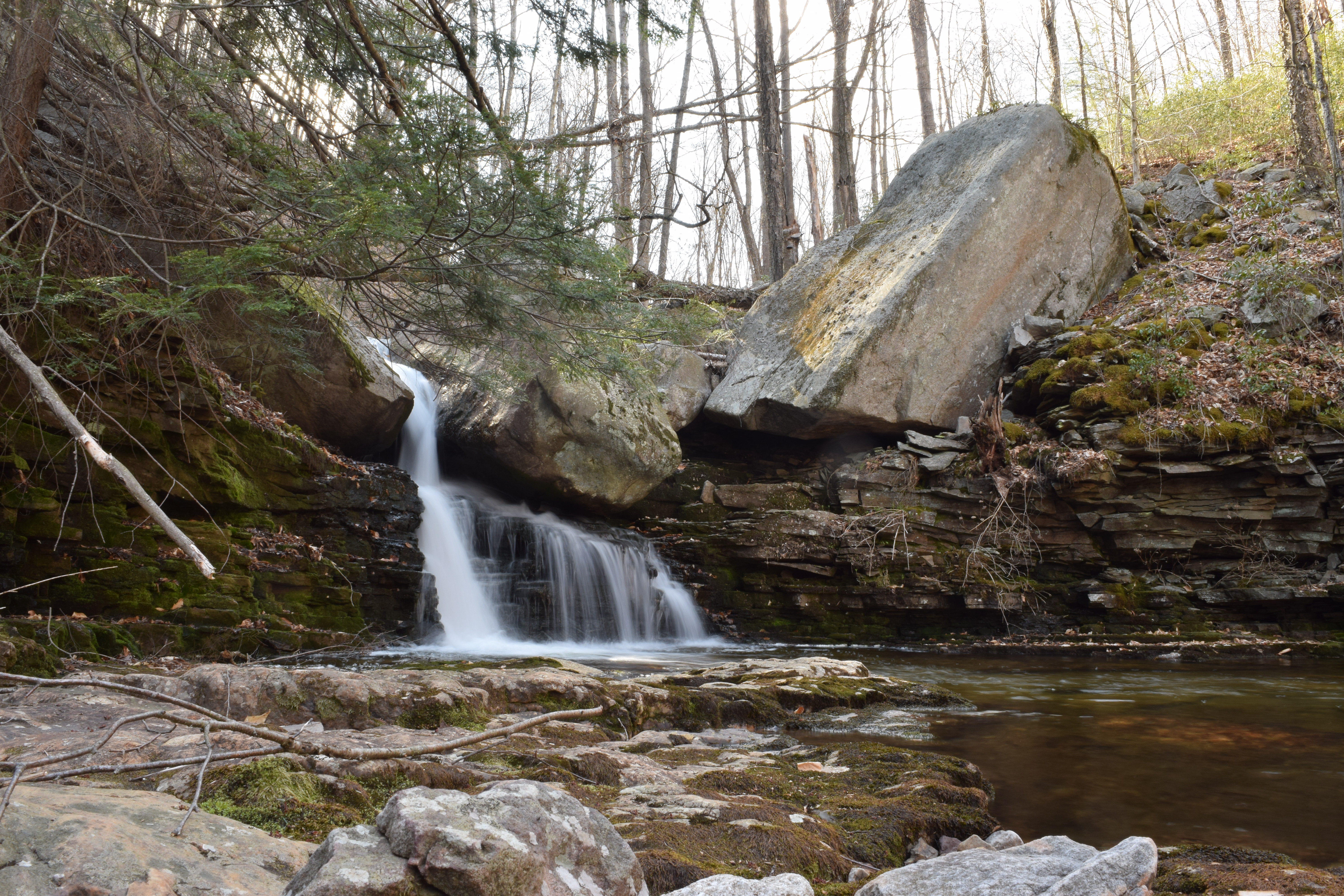 We finally forced ourselves to leave, traversing down the slope of the gorge, passing large boulders and a cave.  I asked Mike to go in for a picture, he declined.  We entered a forest of towering hardwoods and found some old grades through the laurel.  The roar of Frozen Run became louder.  We angled down and reached Boulder Falls.  This place is gorgeous.  The creek is filled with large boulders and non-stop cascades.  The falls itself is not that tall, but the setting is so unique, just as I remembered it.  Massive, angled, jumbled boulders crowd the top of the falls, making it look as if they could slide down at any moment.  The falls feed a pool under birch and maple.  I didn’t want to leave.

But there was more to see.

We hiked downstream with more non-stop scenery, passing the “Bridge to Nowhere”, a random, sizeable wooden footbridge that appears to serve no purpose.  The water leapt from boulder to boulder.  We then reached a grotto of red bedrock and moss, with waterfalls, slides, and deep jade pools.  Boulders added a nice touch to the scenery.  The scenery of this place does not stop.  We reached a private land boundary, where, just for show, there was a sidestream waterfall.  It was time to return to the car.  There were two options, hike back out along the streams as I described in my book, or take a steep side glen into unknown territory.  Naturally, we took the side glen.

We crossed the Bridge to Nowhere and were promptly treated to a twisting waterslide the dropped into a pool of incredible clarity.  A steep, obvious old grade made our climb a little easier.  I looked down into a red rock amphitheater with more cascades, crowned with rhododendron.  It was too steep, and I was too tired, to see it up close.  But this side glen wasn’t finished.  We reached a dramatic rocky grotto with a delicate 60ish foot cascade tumbling down the ledges and boulders.  This glen must be incredible in high water.

The grade we followed disappeared, so we followed the stream back to the road and our car.

This hike took longer than we expected, it just had so much to offer.  We found ourselves constantly amazed and impressed.  The sun was beginning to set as we drove out of the state forest, enjoying one last view as the sunlight pierced the clouds with rays, painting the horizon yellow and orange.

Frozen Run Gorge is described as Hike 55 in Hiking the Endless Mountains (the route in this blog is different than the one in the book).

The gorge is on the middle, left side of this map.

Frozen Run Gorge does not have a trail system, although there are some old grade you can use.  The gorge is isolated and rugged.

This may be a quicker, and steeper, way into the gorge: