The south loop of the Pinchot Trail has been re-routed in four places.  The trail has been removed from all roads and the scenic beauty has been greatly improved.  The south loop is now one of the most scenic, easy backpacking trails in the mid-atlantic.  It features incredibly diverse forests of hemlock, pine, spruce, laurel, hardwoods, and rhododendrons.  There are waterfalls and cascades, beautiful streams, beaver dams, and views of vast meadows and wetlands.  The terrain is forgiving, although rocky in places. 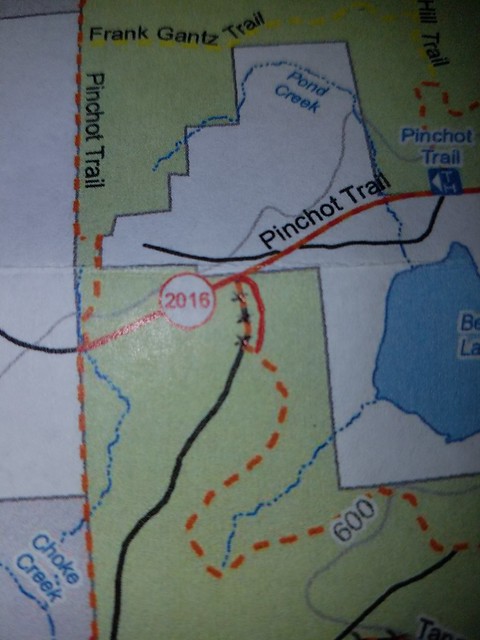 The first re-route is where Tannery Road meets Bear Lake Road/SR 2016.  Hiking the loop clockwise (south) from the parking area, the new route passes through spruce forests, fern meadows, blueberry bushes, a small stream, rhododendron, and mountain laurel before turning left on the pre-existing route.  If hiking counterclockwise, this turn can be easy to miss.  The old trail route along Tannery Road has been abandoned and the blazes have been painted brown. 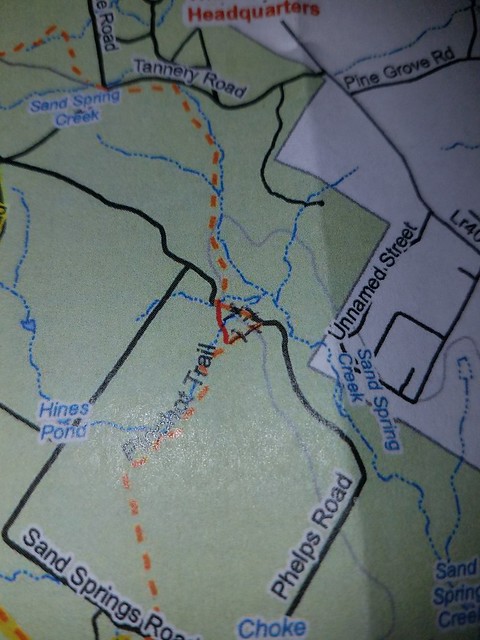 The second re-route avoids a roadwalk on Phelps Road.  Hiking clockwise, cross Phelps Road and enter the woods, hiking along rhododendrons, laurel, and passing near a bubbling sand spring.  Cross a scenic, small stream with more rhododendrons and then reach the pre-existing trail route.  The old route has been abandoned and the blazes painted brown. 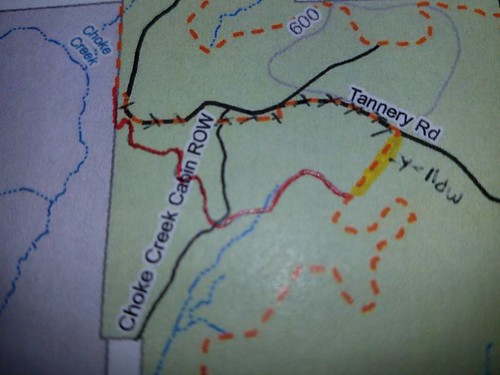 The third re-route is the second longest and avoids the prior tedious roadwalk on Tannery Road.  Hiking clockwise (west) the new route leaves the pre-existing route of the trail and meanders through beautiful forests of pine, hemlock, spruce, laurel, and rhododendron.  These forests are very diverse, stay green even in winter, and have some old growth trees.  The new route turns into a hardwood forest with blueberry bushes and ferns.  Turn right and cross a gated dirt road.  The new route continues under beech trees, meanders through ferns with occasional spruce, passes an open area with rocks, and then veers left along a deer fence.  Leave the deer fence and enter another beautiful spruce and hemlock forest with a stream.  Cross another small stream and reach a fine view of a large wetland.  The new route then follows the state forest boundary to the pre-existing route of the trail.  The old route along Tannery Road has been abandoned.  The old Pinchot Trail south of the Choke Creek Nature Trail parking area along Tannery Road is now blazed yellow to allow for a dayhiking loop. 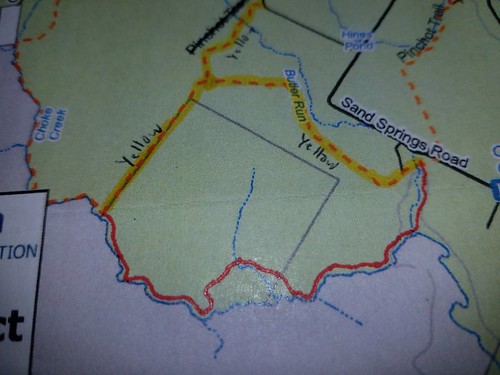 The fourth re-route along Choke Creek is the longest, most scenic, and the wildest.  Hiking clockwise (west) from Butler Run, the new route goes through a beautiful hemlock forest, meadow along Butler Run, and reaches a jeep road at a log bridge.  Cross the bridge and turn left on a well-established trail to gorgeous Choke Creek Falls.  The new route now goes upstream along beautiful Choke Creek, going through forests of spruce, pine, hemlock, and hardwoods.  There are blueberries bushes and meadows.  Enjoy some cascades and slides along Choke Creek.  Hike above a beaver dam and swamp and then reach a superb view of a large meadow with Choke Creek meandering through.  Leave Choke Creek and cross rocky areas with a diverse forest.  The new route then follows a scenic, small stream under a grove of hemlocks.  Return to the hardwoods with some rocky areas and fern meadows.  Descend back to Choke Creek with beautiful meadows and meandering streams.  Continue up along the creek with beautiful scenery, diverse forests, and cascades.  A spruce grove with a cascade is a particularly beautiful spot.  Huge pine trees rise over the trail.  Reach another cascade and slide with a pool.  The new route passes another fine view of a wetland under hemlocks, a beautiful spot.  Continue up along the creek with fine scenery.  The new route moves away from Choke Creek, goes through a spruce forest, and reaches the pre-existing route of the trail.  This re-route is very beautiful, well-blazed, and large brush has been removed, but low brush remains in places.  Over time a tread will be established as more people hike it.  The old route of the Pinchot Trail is blazed yellow, creating an excellent dayhiking loop.

Photos of maps and scenery of the re-routes. 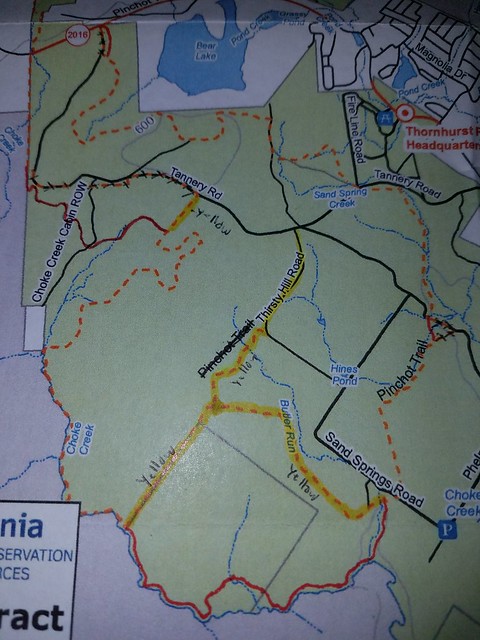 Last month we returned to do a hike to the Lost Mine and the Boulder Caves in SGL 57.  In order to protect these places, I will not reveal their specific location. 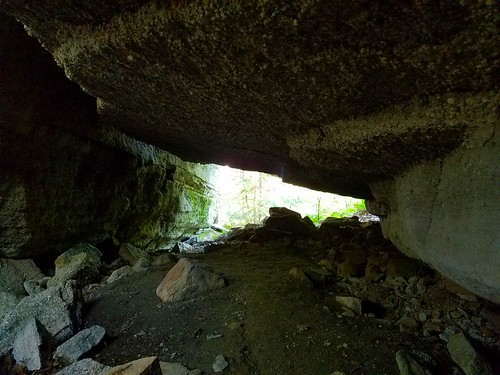 We parked at the parking area for the well-known mine and hiked an old grade over Red Brook, a mere trickle.  We followed a series of old trails and jeep roads into a hemlock forest where we turned left to look for the rumored remains on a Model T.  We hiked this trail out through beautiful, and at times wet, forests.  We reached a trail to the right so we hiked down that for a bit as it passed near a wetland with spruce and snowgrass.  It felt like wilderness. 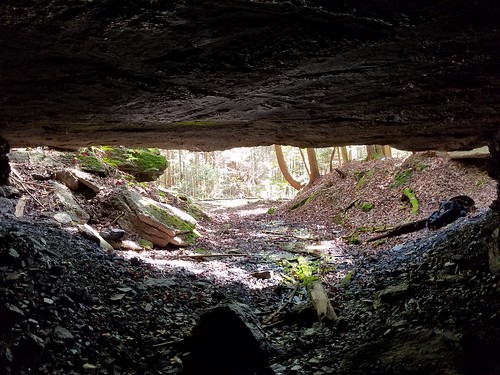 We retraced our steps and as we did we saw the “Model T”.  I’m not sure if that is what it actually was, but it was an old car of some type with some rusted metal decaying in the woods and a surprisingly small engine block. 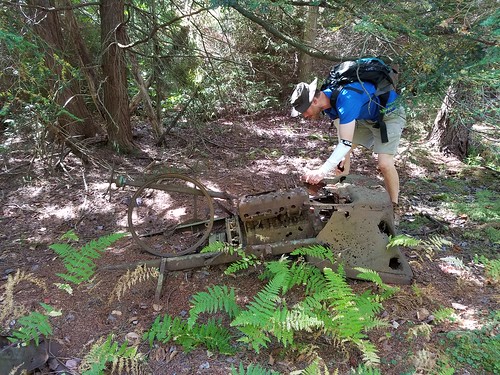 We then made our way to the Lost Mine, embedded among ledges and cliffs.  It almost appears to be a natural cave.  It is possible to go back into the cave, but the low ceiling will require you to stoop, and then crawl.  We didn’t venture very far back in.  Hopefully the bats are getting good use of it. 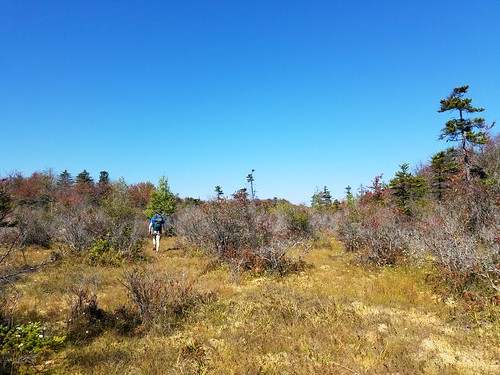 Our hike continued along the escarpment to the east, passing chasms, huge boulders, and boulder cities.  A gradual climb brought us to the impressive Boulder Caves, where 40-50 foot boulders have separated created chasms, caves, and passageways.  It is a unique, wild place.  Moss and ferns draped over the rocks under a forest of hemlock and spruce.  After enjoying nature for a different perspective, from within the ground, surrounded by rock, we retraced our steps back to the car. 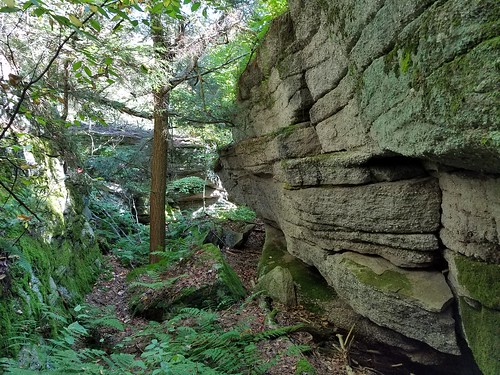 This 5ish mile loop in SGL 57 is a great hike that follows trails that are fairly well established.  The terrain is gradual, with some stream crossings that will be difficult in high water.  The trails do not have signs or blazes.  This isolated loop features superb streamside hiking, diverse forests, fern meadows, big rocks, and a great view.

Begin at the parking area near Wolf Run, located at 41.352937, -76.194498. It is about 10.2 miles from Noxen.  Look across the road for a trail that goes into the woods; follow it.  It crosses Wolf Run and then proceeds upstream along Bowman Creek.  The scenery is excellent with pools, hemlocks, and rhododendrons.  Cross Bean Run and enter a deep hemlock forest.  Look for some metal bars across Bowman Creek; turn right here and leave the creek, following an old grade along a meadow with stone foundations.  Turn left on the next grade, and then right on another.  Climb up and this will bring you to the road.

Follow the road to the right and hike it for .4 mile to Bean Run.  Do not cross the run.  Look for a trail on the left that enters the woods on a grade.  Follow it.  It goes up the grade above Bean Run for about .5 mile.  Turn right (if you continue straight, you will cross a creek and go too far).  The trail descends and crosses Bean Run.  The trail along Bean Run is very scenic as it enters a gorge lined with ledges and large angular boulders with some spruce trees.

The trail curves right and ascends from Bean Run, meandering through the forest, a red marked trail joins from the left, but I’ve never hiked it.  Hike along scenic fern meadows and descend to near another stream, Wolf Run.  If you want to see the view, turn left at a small cairn and cross Wolf Run (if you begin to descend along Wolf Run, you went too far).  The side trail is about .5 mile and leads to a rock outcrop known as Coyote Rocks with views of Bowman Creek valley.  It is a fine view that feels isolated; it is also a great place to see the sunset.  Retrace your steps.

Descend along Wolf Run which features some boulders.  The grade stays above the creek and descends to a meadow with pickers.  Work your way through and reach the road.  Turn left, cross Wolf Run, and reach your car.

Much of this route is described in the White Gold Circuit hike in “Hiking the Endless Mountains”. 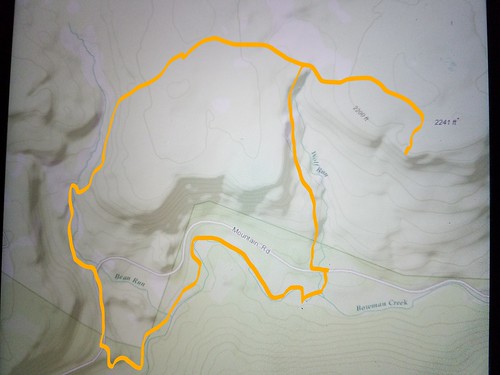 Our tour of the PA Wilds ends with beautiful Lyman Run State Park, a 595 acre park well known for its beauty and isolation, located near Galeton, PA.  It features a pristine 45 acre lake surrounded by mountains and even a small beach.  It is the perfect place to kayak or fish, and the mountains offer superb fall foliage. 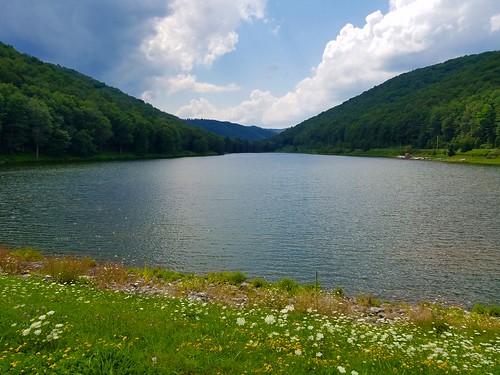 There are several hiking trails in the park that wrap around the lake, go along Lyman Run, or climb the mountains to views and large rocks.  The Susquehannock Trail passes just to the west of the park.  The park also has camping.  With more amenities than  nearby state parks, Lyman Run is the perfect weekend basecamp to explore the Susquehannock State Forest and PA Wilds. 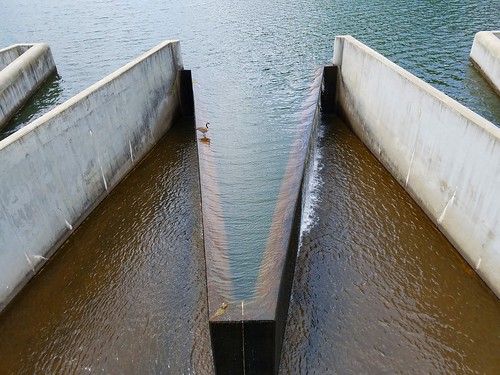 I’ve always enjoyed Lyman Run because it feels isolated and “out of the way”.   The views of the mountains and lake are truly beautiful.  The lake’s dam was reconstructed a few years ago and now features a unique spillway with angle concrete piers that has become a sort of architectural attraction. 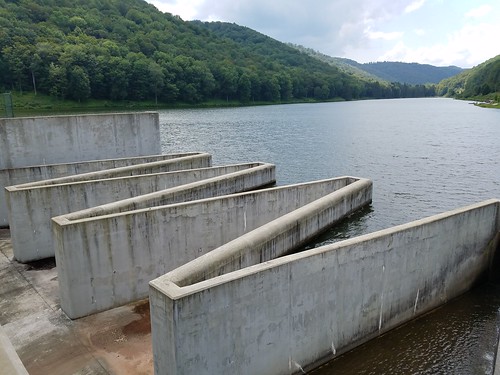 Our visit to the park was quick.  We took in the vista and drove down Wildcat Hollow which surprised me with its beauty- it was a steep glen with a stunning open forest of large hardwoods and fern meadows.  We could see the entire glen through the trees.  We stopped by the lake and enjoyed the fine scenery.  Afterwards we did a quick hike on the Susquehannock Trail and its swinging bridge across Lyman Run. 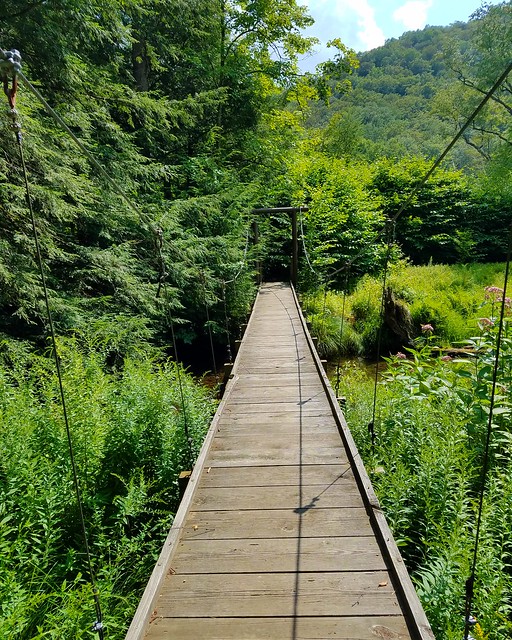