The Bucktail Path (BP) has the distinction of being one of PA’s most isolated and least hiked trails.  This 34 mile long linear trail explores the ridges and streams of the Elk State Forest where you are almost guaranteed that you will not see another hiker.  This is the heart of the PA Wilds. 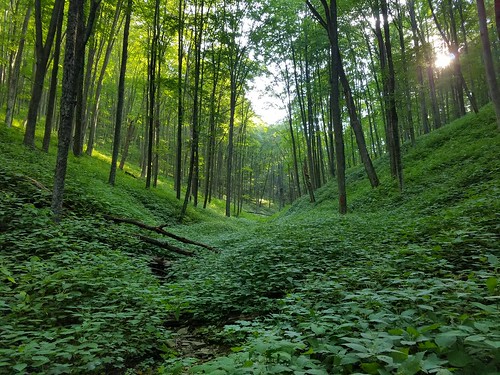 This trail has unique qualities that make it a challenge for the experienced backpacker.  First, it’s a trail of differences.  In places it is easy, or it is challenging.  Sometimes it’s a well-established trail, in many other places it is an overgrown wilderness trek with blazes.  Sometimes you’re cursing the trail, other times you wouldn’t want to be anywhere else. 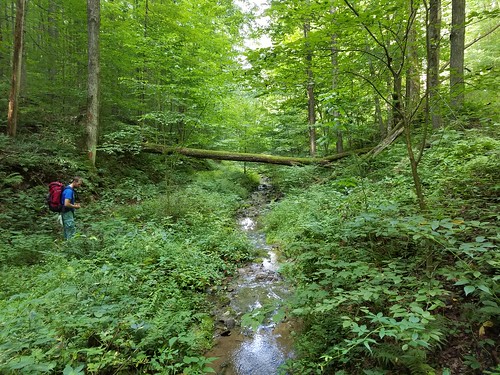 Before hiking this trail, accept it is different.  It is not the AT, it is not well established, it does not cater to you. 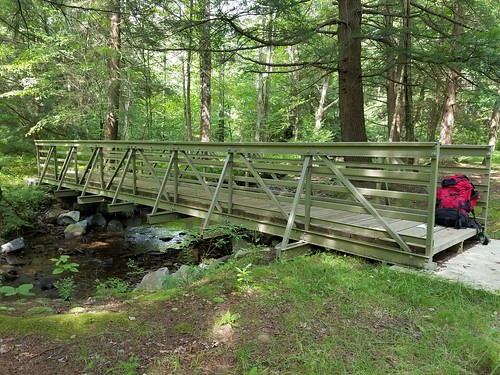 I was in the area to do a presentation for the Susquehannock Trail Club at Ole Bull State Park.  I decided to make a long weekend of it and explore more of the PA Wilds, using my friend’s Ryan cabin as a basecamp.  While there, we decided to tackle the BP. 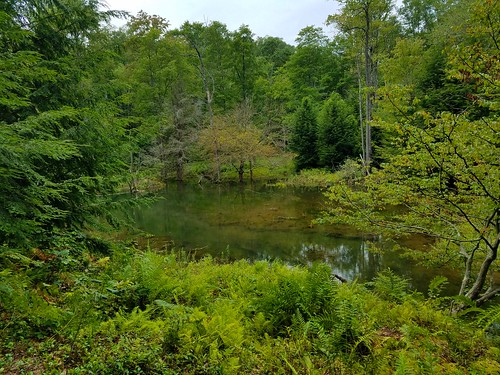 After shuttling cars between Sinnemahoning and Sizerville State Park, we began our hike from north to south.   Sizerville is a beautiful state park that serves as the northern trailhead.  We immediately had some trouble finding the trail, but some blazes guided our way into beautiful, but painful, Buffalo Switch Hollow.  It was inundated with stinging nettle, but it was beautiful as the morning sun sent shafts of light through the stately hardwood forests.  We reached the top, fought through brush, crossed a forest road, and descended into a scenic glen.  Thankfully, stinging nettle became less of an issue as we hiked south with only a few small patches.  The southern half of the trail had no nettle. 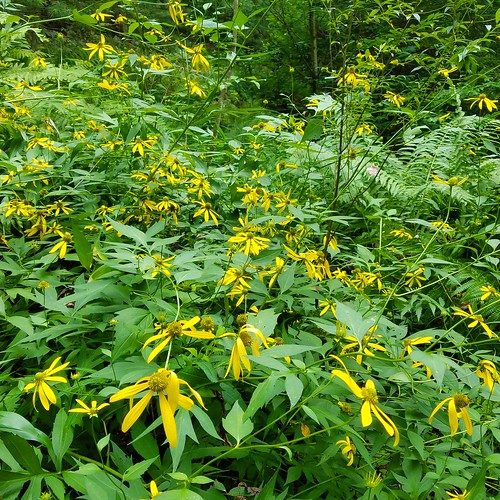 A short roadwalk followed until we turned into the woods and crossed a stream.  The BP then followed a series of gradual, old grades that was a pleasure to hike, with views of the forests and deep glens.  Upon reaching another logging road, the trail made a discreet turn to the left, which we missed, but we soon got back on the trail. 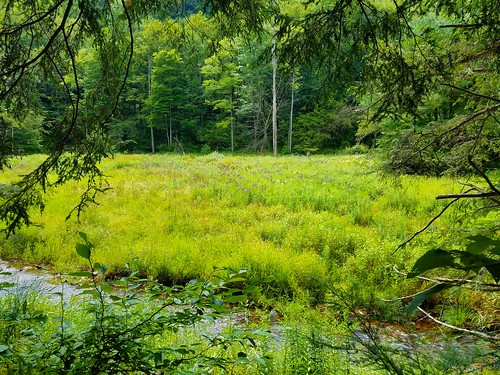 Next was a highlight, McNuff Branch.  This isolated valley features beavers ponds, meadows, hemlock groves, and the trail’s finest camping.  In places, beaver dams nearly flooded the trail, requiring a log crossing.  The views over the meadows made this section a treat, with many birds and butterflies.  Ryan saw a buck in a meadow below the trail.  The isolation of this valley and its scenery made this a very enjoyable hike. 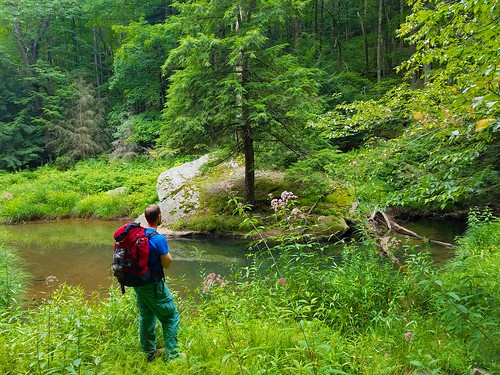 We crossed a road, walked near some cabins, and began a climb along a small stream with boulders and cascades in a beautiful glen.  The trail leveled at the top with thick laurel and ferns and then descended to the BP’s next highlight-Rock Run.  This creek has carved a rugged gorge with large boulders and many cascades and falls in high water; one falls might be 12 feet high.  The water was low on our hike, but the creek was still beautiful.  We found an old campsite along the creek, bringing an end to our 18 mile day. 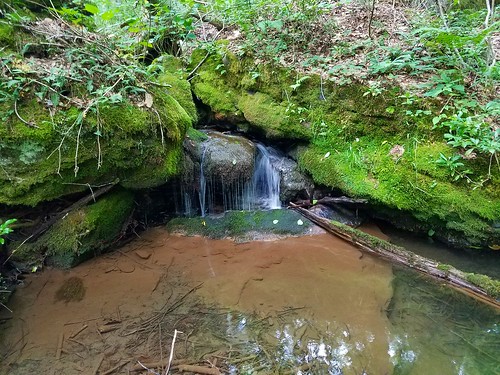 While setting up my tent, I realized I forgot one of my poles.  I tried to rig my tent up with string and a sapling, with poor results.  The rain overnight didn’t help, but I stayed mostly dry, somehow. 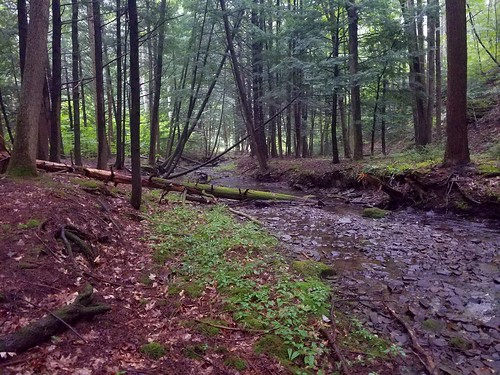 We got up early the next morning and proceeded down the trail as mist dripped from the trees.  The BP made a discreet turn off the road and along the creek with deep, wet hemlock forests that were beautiful along Whitehead Branch.  Another road crossing brought the biggest climb of all, over 1,000 vertical feet along the side of a deep gorge with fern meadows.  It was beautiful, but tiring.  The morning sun fought through the mist, only making the forests more scenic.  The trail leveled along laurel and traversed a series of ups and downs with vast fern meadows that stretched deep into the woods. 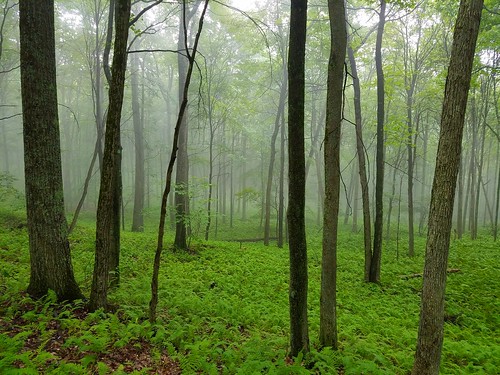 We reached a narrow pipeline swath, where the BP made a right turn with no blazes in sight.  A steep climb up the swath followed to where the trail turned left into the woods.  I climbed through the forests, crossed the pipeline again and descended through more scenic forests with pine and hemlock to Ridge Road, which the trail crossed. 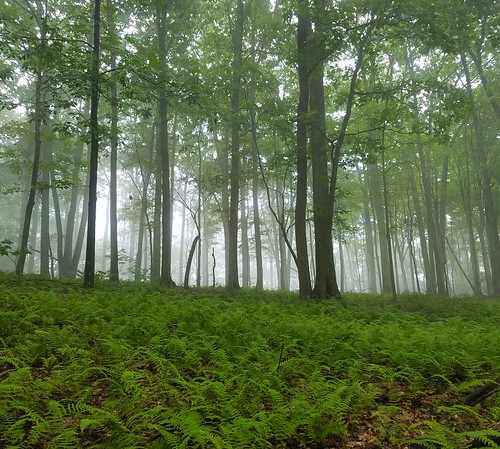 The next highlight was the Right Fork of Brooks Run which featured beautiful glens with tumbling streams and deep hemlocks.  A steep climb followed to the Brook Run firetower and cabin.  The BP then crossed Ridge Road and entered the Squaretimber Wild Area, passing a yellow trail to the right.  A gradual climb brought us to an open area and old quarry with nice views to the south.  There is a dirt road here, we took it to the right to a large meadow with views to the south.  It would be a great place to camp to see the stars. 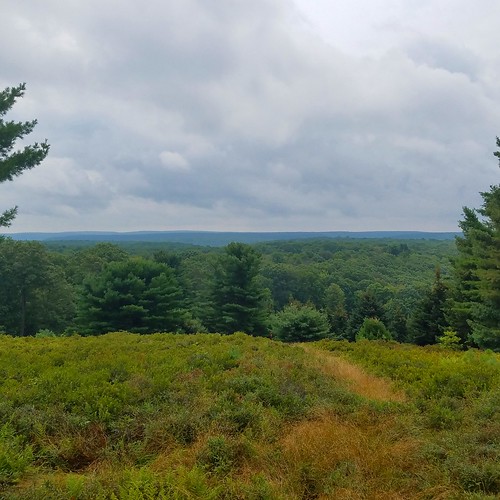 More views followed on the BP as it crossed a meadow of blueberries and pine trees.  The trail soon followed a grassy pipeline and crossed Ridge Road at a small parking area and a sign for the Pepper Hill Trail.  The BP continued along the pipeline swath, descending into a valley with a seasonal stream and then crossing private property along a large meadow. 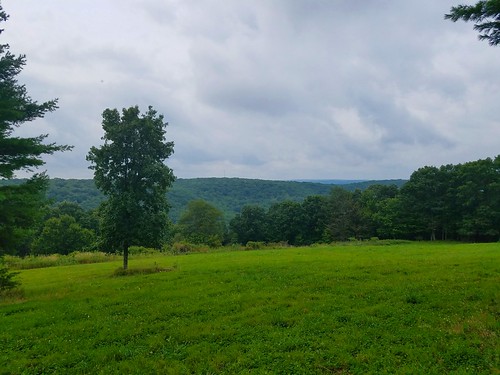 The trail turned left off the pipeline swath and into the woods along the steep edge of the plateau with views through the trees.  The mountain terrain was beautiful.  It then crossed into private land along a jeep road on a ridge that became more and more narrow.  The trail turned discreetly left off this jeep road along the narrow ridge with steep terrain on both sides.  A steep descent brought the trail back to the jeep road, and another steep climb followed up the spine of the ridge. 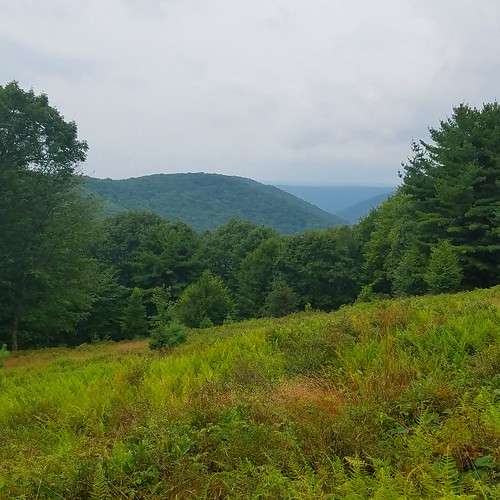 I became a little frustrated with the trail, but things soon improved as the trail re-entered the Elk State Forest and the Johnson Run Natural Area.  This was a beautiful section with pine forests along the precipitous ridge and even a few views.  It kind of felt like an island in the sky, being surrounded by deep canyons and glens. 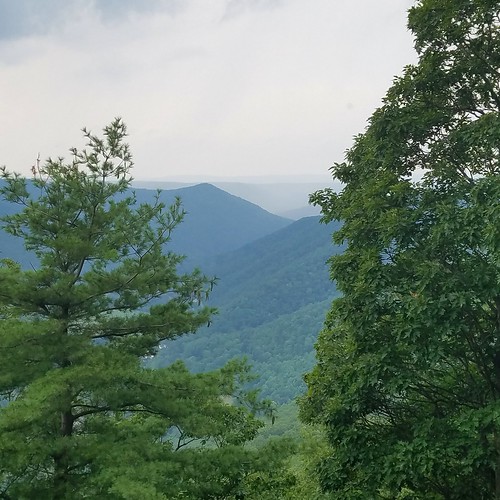 The trail reached a dirt road; I had hoped to explore some meadows off the trail, on the ridge to the south which had awesome views, but I was tired and the skies threatened rain.  The BP followed the dirt road on a very long two mile descent across private land.  At the bottom, we crossed Grove Run without a bridge and reached the small parking area, the southern trailhead of the BP outside of the village of Sinnemahoning. 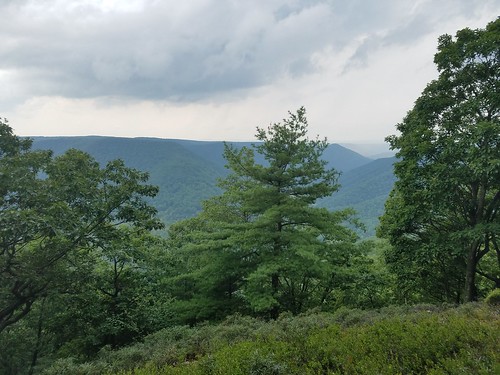 We were wet, stinking, dirty, and tired.  We found a restaurant in Sinnemahoning and hobbled in for a delicious meal. 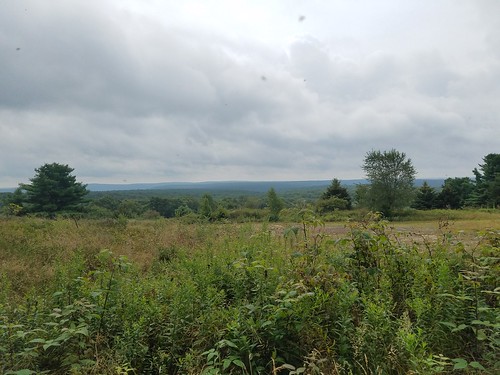 It was good to return to the BP and hike a trail few others have.  It was a unique and rewarding experience deep in the forested wilderness of the PA Wilds. 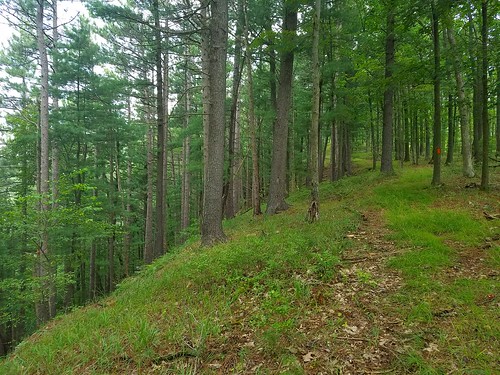 Blazes:  Orange.  The trail is blazed fairly well, but expect discreet turns, particularly off of dirt or jeep roads

Stinging nettle:  A huge issue at the northern end, in Buffalo Switch Hollow.  Not a problem on the rest of the trail.

Problems:  Few views, trail overgrown in places, roadwalk at southern end, walking along pipeline swath, the ridge along the southern end is challenging and has some steep climbs and descents without views.

Would I hike it again?  Yes.  I think the BP has more scenery and good qualities than people give it credit for.  I would recommend a hike from Sizerville State Park to the Pepper Hill Trail along Ridge Road, south of Squaretimber Wild Area.  The southern section could be beautiful with some re-routes to take advantage of views and meadows along the dramatic ridge.  The BP should also take advantage of the vistas on Ridge Road, which it avoids for some reason.

Other things to do:  Explore the beautiful Squaretimber Wild Area with its deep gorges, drive Ridge Road to see its great views, camp and hike at serene Sizerville State Park, explore bucolic Emporium and other small towns in the area.

4 thoughts on “Backpacking the Bucktail Path”